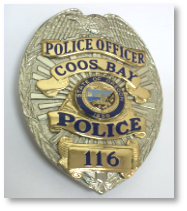 received a report of several work site trailers, belonging to Knife River Corp., Reese Electric, and Avery Plumbing, that had been unlawfully entered at the Coos Bay Village construction project, located at 1200 N. Bayshore Drive. Numerous tools and equipment had been stolen, valued at approximately $10,000.

Officers Chris Rule, Wesley O’Connor, and Pete Kirk responded and began an investigation into the theft.  During the subsequent investigation and with the assistance from Coos Bay Dispatcher Kristen McGarity, they were able to obtain a description of the suspect and the suspect vehicle. Employees at the construction site located some of the tools that had been stashed in the bushes near the construction site.

Officer Rule later located the vehicle and spoke with the vehicle operator, 29-year-old Jesse Nelson. Nelson matched the description of the suspect. Although Nelson attempted to lie about his identity, officers were able to confirm his identity and recovered a substantial number of stolen tools from the trunk of his vehicle. Throughout the course of the day, the Coos Bay Police Department with the assistance of the North Bend Police Department, and the Oregon State Police, recovered nearly all of the stolen tools.

It was also discovered that Nelson had two outstanding warrants out of the Reedsport Police Department for drug related offenses. Nelson was subsequently arrested on those warrants, as well as Theft 1, Criminal Mischief II, Unlawful Possession of Methamphetamine, and False Information to a Police Officer. Nelson was transported to the Reedsport Police Department and lodged at their jail on their warrants.

Council to Consider Changes to City Land Use Regulations